Absolutely!, this website makes deciding where to move a lot easier. I paid for the subscription, its worth the money paying for the extra info. When chosing a primary you can even check in which secondary children usually go.

Mark
Trustpilot
Rated Excellent with a TrustScore of 4.8 out of 5

Last month we introduced an innovative new feature, which you won't find anywhere else; the ability to see which secondary schools primary pupils move on to and which primary schools secondary pupils have come from. This was been made possible by exclusive research carried out by Locrating, using data from the National Pupil Database, made available to us by the Department of Education and Office for National Statistics. 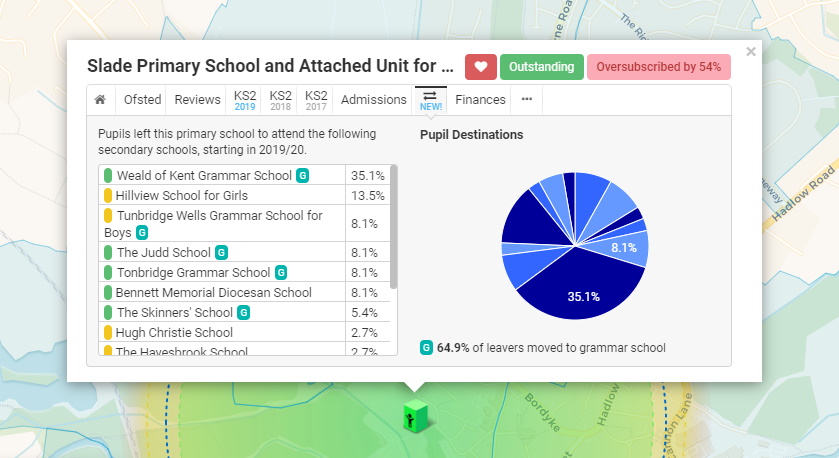 The National Pupil Database contains every child in every state school in England. We've never seen published at a national level any information about how children move between specific schools and it has always been something that we've thought would be really interesting to see. You can sometimes get this information if you speak to a school directly, but having the data readily available for all schools in England is a totally new and unique feature.

The data analysis is actually really quite simple, you just need to compare the schools each pupil attends across two years of data. Essentially, looking at where pupils were when in Year 6 (the last year of primary school) and Year 7 (the first year of secondary school). This allows a pie chart of destinations to be built for all pupils in the last year 6 of a primary school and a pie chart of origins for all children in the current year 7 of secondary school.

We also looked at the moves between GCSEs and A-Levels, a time when students will often change schools, moving to a sixth form college or an alternative secondary school for example. 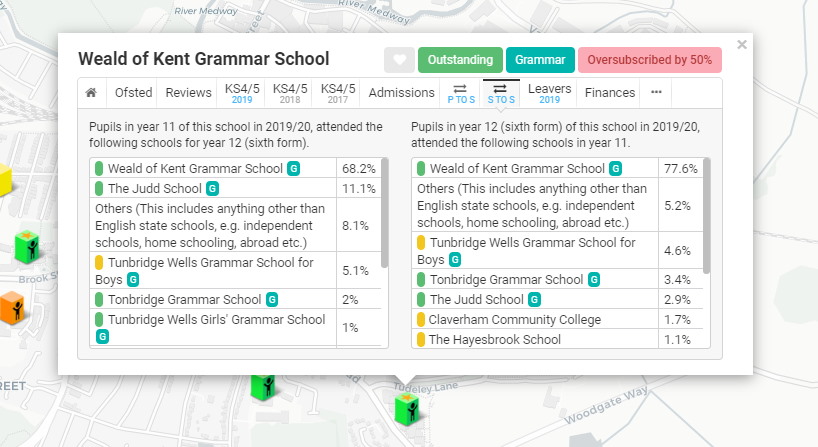 Independent school pupils are not included in the National Pupil Database and as such we can't track their movements; but we do track pupils that left the database or were not previously in it; these appear in the "others" category. Whilst this will include pupils who have moved from/to abroad and school leavers at 16, it will largely be pupils that have moved from/to the independent sector. You see a lot of pupils joining Grammar schools for example, from the 'Other' category and this reflects the large number of moves from private prep schools to Grammars.

Because we know which secondary schools are Grammar schools, we are further able to show, how many pupils from a particular primary school went on to a Grammar school. This again is a unique piece of information, never before readily available for all schools in England.

We hope you find the new feature useful and as always we will continue to innovate, adding new and exciting features such this to Locrating.